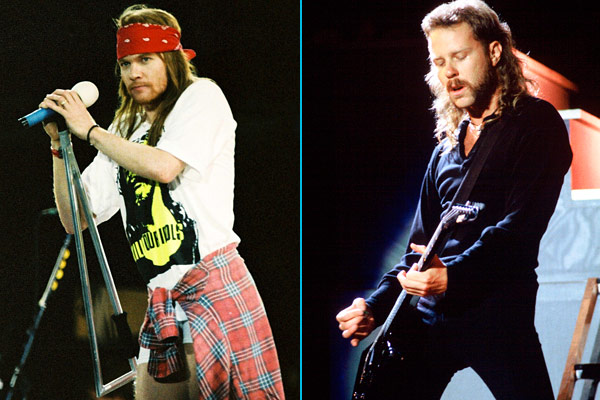 Black Album vs Use your Illusion

Metallica and Guns N’ Roses were the two hottest Rock bands in America – and around the world -, mostly because of ‘Black Album’ and ‘Use Your Illusion’ great success, in 1991. Luckily, Metallica was one of the few bands that still had a friendly relationship with Guns N’ Roses. As a result, the Guns N’ Roses/Metallica Stadium Tour occurred: a combined tour; both bands taking the headline, all over North America. The tour ended up being a fail, but that’s another story.

Metallica, unlikely, received many awards as well, however, they were less significant than Guns’.

The band has recorded six studio albums, three EPs e one live album. They came up with some of the most iconic singles in the history of rock. Hits as ‘Welcome To The Jungle’, ‘Sweet Child O’Mine’ and ‘Paradise City’ for example, are classical songs that were almost unbeatable.

Axl Rose’s voice is another point to Guns N’ Roses, his unique way of singing and mastering notes would put him on the top five singers of all time – if we are considering his past in the band – unfortunately, on the present day, his completely out of breath and tuneless.

A matter of skills

Regarding the musicians, both bands are amazing and talented. Still, it’s easy to say that Slash is one of the most iconic symbols of rock music, being known for his outstanding guitar solos and style. – Kirk Hammet can be one of the best, but Slash has a stronger image.

Fans of rock like the figure of a bad boy… and when it comes to that, the members of Guns N’ Roses are specialists: They were arrested several times for destroying hotel rooms, aggressive behaviour and problems with the press. Surely this won’t count as a band’s success, but it helps build a picture to the public’s imaginary.

Guns n’ Roses may have broken up – or not, since they are back together lately on ‘Not in This Life Time’ tour and it’s AMAZING –  but its style and image will always be an example of a great heavy metal band.

If after reading this, you are still thinking Guns N’ Roses will be taking the first place, prepare yourself for a little surprise: This band has emerged in the metal scene with an innovative style, variations of Rock/Metal underground with heavy and fast lyrics mixed with brilliant melodies and solos. Pleasing many fans promptly.

They did such a good job that they out came Guns on sales – 140 million records sold all over the world. Getting a total of 24 awards, which shows the dedication towards fans this band had. While GN’R were giving a ‘shit’ about their audience, arriving hours late, or leaving stage in the middle of the set for no good reason – Axl used to do that all the time back in the days –, James Hetfield couldn’t be a better front man. Metallica respect their fans.

Maybe Hetfield is not the best vocalist ever, but his musical compositions are a huge success. And Kirk Hammet is considered one of the best guitarists ever, surpassing Slash on charts.

They released 10 studio records, 4 live albums, 24 videos, 1 collection, 45 singles and 6 extended plays. It is a lot! Hits like ‘One’, ‘The Day That Never Comes’ and ‘Master Of Puppets’ are fantastic on all levels.

Although there are many discussions over their changing of style – starting at their 5th album called ‘Black Album’ – Metallica has kept going on, always trying to make good music. And they were following the right path.