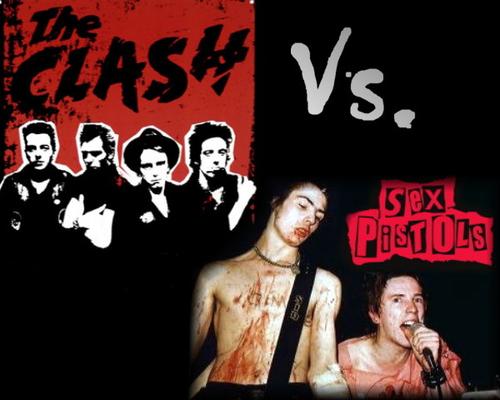 When The Clash started as a punk rock underground band in London 1976, the Sex Pistols preached anarchy and system destruction, spitting, cursing and being as violent as they could be. They were also a protest band just like the Pistols, but in another way. Anyone that knows a little bit about punk rock must have heard that ‘’while the Sex Pistols wanted to destroy, The Clash wanted to unite people’’. Right after Sex Pistols broke up, The Clash was claimed as the ‘only band that matters’.

Whereas talking about musicians and sound quality, there is no way to compare Sex Pistols and The Clash. The Pistols were not the best at playing instruments: a drummer that could only play one beat, a guitar player that only knew 3 accords and a bass player – that despite the fact he may be the greatest symbol of punk music – couldn’t barely play the instrument. As a matter of fact, the way they started was pretty weird as well.

Malcom McLaren was a design and shop owner based in London, England. His store ‘Let it Rock’ was a clothing shop for teddy boys and one day (to make long story short) he decided to form and manage his own band; he would pick guys that came to his shop and put them together as a band (dressed in his designed clothing), and that’s how Sex Pistols were born.

During their 3 year career, the Pistols were guided by Malcom: their attitude, songs and style were part of the package, and it paid off: The band started a national movement, a different scene, and new bands followed their path (including The Clash) it was epidemic.

By releasing the single Anarchy in the UK in 1976 the band became a big hit to the great audience. For the first time someone had the guts to be aggressive towards the British Government in public, and the band was promptly adopted as a symbol of social dissatisfaction.

During a TV show that hosted for the first time punk bands to the British audience (by the way, it only happened because the band Queen had called off an interview that day), Johnny Rotten said a big and loud ‘’ fuck off’’ when TV host defied him to say something agressive, that was new to that time, and busted the selling of Anarchy in the UK –  and it led to the band’s dismissal from EMI records.

In 1978, Sid Vicious would be arrested for murdering his girlfriend Nancy, by stabbing her in a hotel room in New York. After being released from jail he died at his mom’s house of a heroin overdose, during a party to celebrate his freedom.

The band was over and John Lydon would be the only one to pursue a solo career.

Joe Strummer formed The Clash in only 24 hours, they met at Portobello road Street and by the evening – Mick Jones, Paul Simonon and Terry Chimes -were already practicing.

Compared to Sex Pistols, they had pretty decent musicians: Topper is by far one of the greatest drummers in punk rock, Mick Jones has proven himself as a good guitar player and Paul Simonon was not an amazing bass player, but tracked some great bass lines on ‘Guns of Brixton’ and ‘London Calling’, the band’s greatest hits.

Their first album, self-titled The Clash, was acclaimed by the public and critic and is still considered one of the best punk rock albums from all time. It proves itself by songs as ‘White Riot’, ‘White Man in Hammershit Palais’ and ‘I’m so bored with the USA’. Leading the band to go on a tour and perform in England, France and Germany.

They had a great commercial success, overcoming Sex Pistols (very famous on the underground scene), they were bigger than the punk scene, getting to play for sold out shows at big arenas and stadiums. They were the only punk band that made it through 70s and 80s and to reach the top of the charts. Having influenced movements as such New-Wave, pop punk and mostly Ska Punk, they had freedom to try new things and rhythms inside punk. It’s OK to say most of the punk bands from the 80s and 90s (Green Day, Offspring, Weezer…) owe a lot to the Clash.

A band legacy is its attitude, both bands had something to say, a statement to make, which makes them two important figures in the history of our culture.