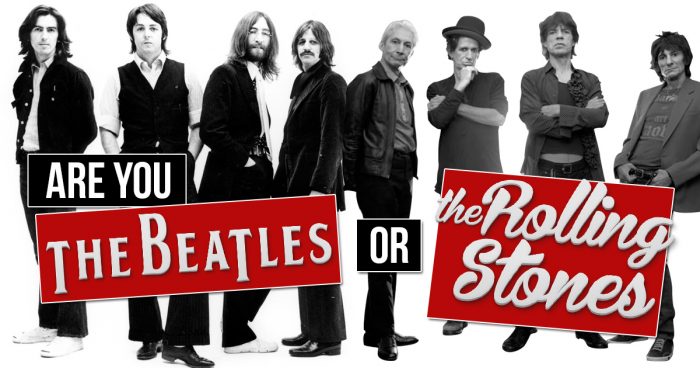 The most famous battle

Perhaps the most famous ‘battle’ of all music history is The Beatles versus Rolling Stones. This whole emulation has started with them back in 1965 when journalist and writer Tom Wolfe classified them as bands with very distinct characteristics, saying that

‘’The Beatles want to hold your hand, but the Stones want to put your city on fire’’.

One thing is right: they had pretty distinct drives.

Opposite poles of a magnet. And, however, they had a friendly relationship, anyone that still listens to them knows they are like water and oil.

Maybe they didn’t have much consciousness about all this mess back in the days, but surely they were trying really hard to out stand each other. Released in 1968, ‘The White Album’ is a portrait of how The Beatles were in that time, as a band, as individuals. It brings songs as ‘Happiness is a Warm Gun’ (John Lennon), ‘While My Guitar Gently Weeps’ (George Harrison) and ‘Blackbird’ (Paul McCartney).

Now, ‘Exile on Main St’ that came out in 1972 it’s a record that represents the energy that motivated the Stones. Tracks as ‘Rock Off’ mix a bit with country style just like ‘Sweet Virginia’, even the blues that is already intrinsic in the group’s roots, as seen on ‘Stop Breaking Down’. Songs like (I can't’ get no) Satisfaction (The Rolling Stones, Out Of Our Heads, 1965) and Let it Be (The Beatles, Let it Be, 1970) were immortalised in history.

The Fab Four (as The Beatles were known in Liverpool) had a ‘quick’ career, which only lasted from 1960 to 1970. On the other hand, the Rolling Stones is still active as one of the oldest bands in rock music, starting their career in 1962, and being a huge success even nowadays – even though such fame is due mainly because of their first albums.

The Beatles were good guys, all peace and love. They hated each other, that’s true, but it’s hard to blame them. Only who plays in a band knows how hard it is not to kill your band mates in every rehearsal. And at the same time, missing them so much it hurts when everything falls apart.

The Beatles were the light while the Stones were prevarication. Indeed, that’s the moment when tables turn, changing the whole game: The Beatles could reinvent themselves; they were angels, then they were high on drugs, then they had a dark time and their music changed with them, innovating. They created new concepts and tried new things that are still copied by bands now. The Stones started with a bit of Blues, following the pop, rebel style … and they are still stuck with it. This is not bad at all, but it is a more simplistic way to hold a band together and make music.

At some point The Beatles broke up, the components kind of stained their final journey and life’s casualties did the rest of the work by taking Lennon and George. After a brief existence they were marked in history, consumed by the flames with their beautiful angelic faces.

The Stones, on the other hand, are still burning in the flames of history. Making come backs as much as they can and getting old on stage. But still holding on the fact that no other band had the guts to take their satanic rock position. They are the rebellion movement and The Beatles the tuning.

They are very important separately. But together they are the rock foundation.